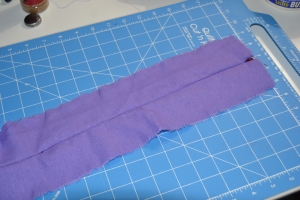 Given a choice of what kind of zipper I put in a garment, I will always reach for an invisible one.  I like the way they disappear into the seam. Whether it’s in the back, on the side, or up the front, only the zipper pull gives any indication there’s a zipper. I learned how to insert them in 1973 when I was making my honeymoon clothes. My zippers got worn in a hospital, at a church picnic, in district and superior court, and at the birth of twin polar bears. Not the honeymoon we had planned, but my zippers looked good.

I also choose invisible zippers because they are so easy to sew in. You do need an invisible zipper foot to do it easily and well. It’s not an expensive foot, and if you don’t want to buy one especially made for your machine, the generic ones work quite well. An invisible zipper foot has a channel in the bottom for the zipper teeth to slide through, and most have a piece on the front that holds the teeth down flat as you sew. Mine looks like this – 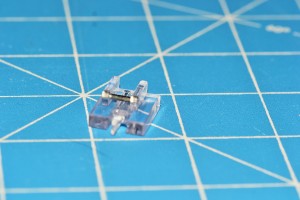 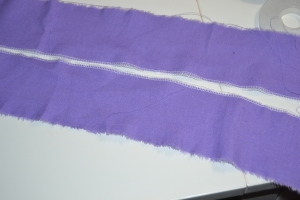 If you need to shorten the zipper, you do it the same way we did last week.

Either use a glue stick or put a strip of wash-away basting tape in the seam allowance on the right side of the fabric on one pattern piece. 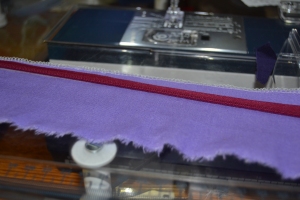 Position the zipper foot so the zipper teeth are in the groove and the piece on the front is pushing the teeth down if you have a foot like that. Move the needle so it enters the zipper close to the teeth but not in them. 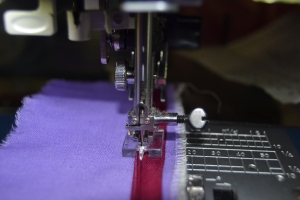 Zipper in the groove of your zipper foot as you sew

Sew down the side of the zipper almost to, but not past the zipper pull.

At the end of the zipper

Secure your stitches and cut the threads. 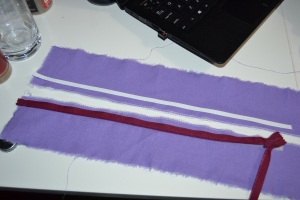 Glue or tape on the other pattern piece

Run the glue stick or the tape down the other pattern piece. Press the zipper into place, making sure your pattern pieces are aligned.

Second side of the zipper in place

Put your zipper foot over the zipper and move the needle into place.

Sew down the zipper stopping at the same point at the end of the zipper. Secure your threads and cut them.

Stop in the same place

Zip the zipper closed.  You might have to run the pull up and down a couple of times to get it runnig smoothly. 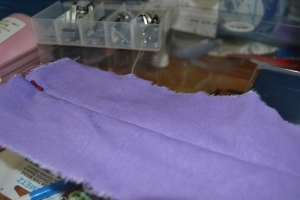 Put the regular zipper foot on your machine.

Starting at the bottom of the garment sew the seam closed. Stop a 1/2″ to an inch past where you stopped sewing the zipper in. 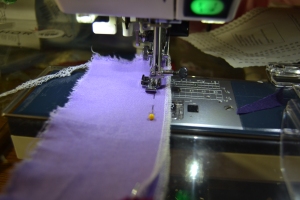 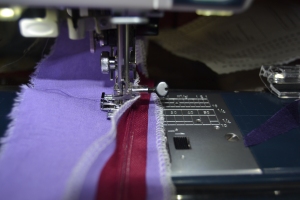 Press your seam open being careful not to melt your zipper. 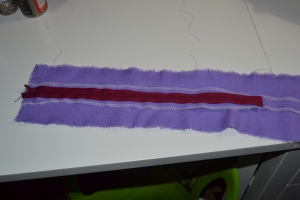 How easy was that?

I sometimes interface an invisible zipper the same way I interfaced the regular zipper last week, but since the goal is to have the zipper disappear, unless the fabric is likely to fray or get caught in the zipper, I skip it.

I had planned to move to zippers in lined garments next week, but since we have so many new boy patterns recently released, I’m going to do zippers in flies first.  Not as easy as this is, but not hard.

This entry was posted in Zippers and tagged invisible, Zippers. Bookmark the permalink.